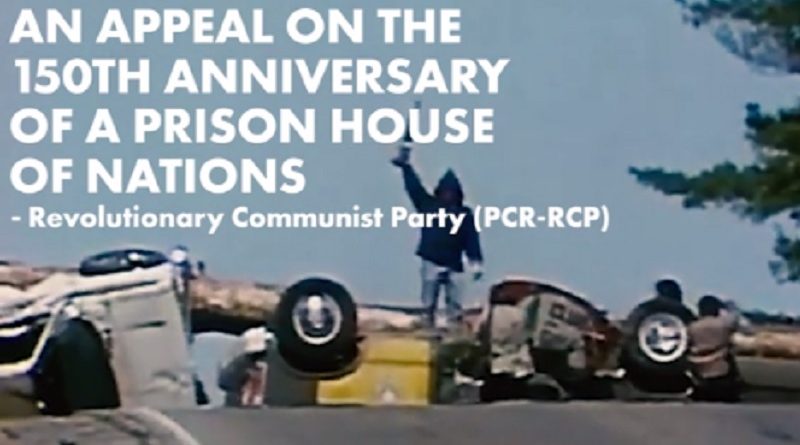 Today marks the 150th anniversary of Canada. Canada, a prison-house of nations, which keeps indigenous peoples subjugated under colonial rule. Canada, a dream-come-true for the rich, which continually attacks the working class and provides a veritable playground for the capitalist class. Canada, a country which is a breeding-ground for all other forms of oppression, constantly dehumanizing the most marginalized within our societies. Canada: a source of misery for millions and millions, at home, and around the world. Canada: a country which must be ended if the masses in this country are to enjoy even the most basic human dignity.

To indigenous peoples, who have struggled so long against Canadian colonialism: keep up the struggle for legitimate national self-determination! Do not settle for “reconciliation” or whatever other traps the Canadian state has set for us on our path to liberation. Nothing short of full control over our lands, resources, and people –in short, complete control over our futures as nations – will be able to overturn the effects of centuries of colonialism. And know that in the struggle for national self-determination, the Revolutionary Communist Party will be right alongside us, fighting to dismantle the prison-house of nations known as Canada.

To the workers and poor of Canada, settler, immigrant, and indigenous: we are poor because others are rich. The Canadian state has expertly crafted a system in which the work we do goes to benefit a small minority rather than improving our lives. While the rich go on expensive vacations, eat the finest foods, and relax in luxury, we work day-in-and-day-out and go into debt just to make ends meet. In almost every conceivable way, profit is put before people. It is not our fault: the system was designed this way. But it doesn’t have to be this way! Our enemies are not indigenous peoples and immigrants, but the capitalist class and the capitalist system itself! If we unite and fight, not only can we make gains –higher wages, cheaper rent, better working conditions, etc. – and improve our situation under the current system, but we can overthrow capitalism itself and build a world without exploitation: a world where we as workers aren’t treated as expendable wealth creators, but rather as people. The Revolutionary Communist Party will work tirelessly to this end, struggling alongside all those who fight for a better world.

To all other oppressed peoples in Canada: know that our struggles are also legitimate and just. Whether we struggle against xenophobia, anti-Black racism, racism, sexism, heterosexism, cis-sexism, homophobia, ableism, or any other form of oppression, it is absolutely correct to demand basic human dignity against the systems which conspire to dehumanize us. While it can be tempting to look at each of these struggles as disconnected and unique, it is only through uniting –understanding our common humanity – that we can truly be successful in building a world without oppression. And in the struggles against specific forms of oppression, as well as the battle to unite these struggles together, the Revolutionary Communist Party is with us.

Who are we? The Revolutionary Communist Party is not a political party like the mainstream parties: we have no interest in parliament, and we don’t make promises we have no intention of keeping. The tasks we have set for ourselves are simple to grasp: the overthrow of the colonial Canadian state in order to secure real self-determination for all oppressed nations in what is now Canada, the end of capitalism in order to ensure that survival and a high quality of life for all is guaranteed, the construction of a truly democratic society so that we –all workers and oppressed peoples- can have control over our lives, and the end of Canadian imperialism to ensure that we do not live well here at the expense of others across the planet. In short, we struggle for socialism. And we know that the capitalist class will not grant this without a fight: the only way to build a truly just world is revolution. Among our members are indigenous peoples and settlers, immigrants and non-immigrants, men, women, and trans and non-binary people, students, workers, old and young. We come from all parts of Canada, and are united in our singular goal of overthrowing all existing social conditions. And it is only through this revolutionary unity that we can be successful in our respective struggles.

The time for action is now. We call upon all those who struggle for a better world to reach out to the Revolutionary Communist Party. Email us at [email protected]: we are active across Canada. It is only through bringing our various struggles together and planning a strategic path forward that we can successfully overthrow capitalism, imperialism, and colonialism. For far too long the capitalist class has been winning. We can reverse the tide. We have nothing to lose but our chains: we have a world to win. End Canada!