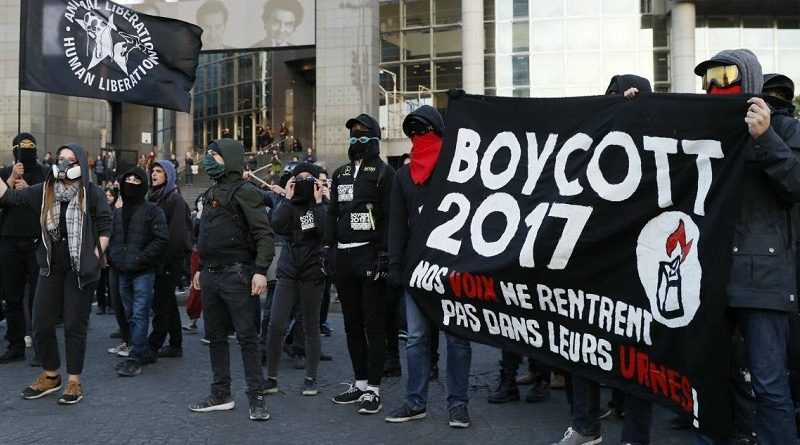 The first round has passed and without great surprise, the second round has been announced to be a duel between Macron – Le Pen.

Marine Le Pen already had her place in the second round secured for a very long time according to the polls. Macron, for his part, fully benefited from the deterioration of the Socialist Party. Everyone was able to observe the immense joke of the so-called “left” primaries; after the Hamon’s primary election, many left the ship with Manuel Valls at their head, showing their regard for the primary voters and all the credibility and trust that can be given to this kind of individual.

This first round of the elections ended with the collapse of the Socialist Party, with an absolutely ridiculous showing only allowing him to recover his campaign expenses. Similarly, the scandals provoked by Fillon torpedoed his campaign, and he was unable to reverse the trend. All this left the field open to Macron.

What does Macron’s win mean for our class?

There is neither Les Republiains nor PS in the second round but still nothing has changed. Even if Macron is not in the PS, he is not a new or different politician as the bourgeois media likes to present.

His experience in Holland’s government as Minister of the Economy tells us a lot about the character and prospects of his government: an uninterrupted succession of unpopular and anti-worker attacks, as has been the case under Holland (Pact of responsibility, ANI, Macron Law and to crown the whole lot, the Labor Law), but additionally uninhibited. For Macron, the El Khomri law is not enough – we need a “law El Khomri power 10”! In short, there’s nothing very different here from the social “blitzkrieg” that Fillon announced.

During the debates, meetings and interviews, Macron has been careful not to clearly disclose the substance of his program. He prefers to use hollow formulas avoiding at all costs to be divisive. He wants to be different, but only in appearance, advocating for fresh, young poltical perspective and highlighting his youth. If we dig a little bit, we realize that he is preparing a real war against society, a kind of second round after the quinquennium of Holland: saving 25 billion euros in the so-called “social sphere”, 25 billion from the State and € 10 billion from the local governments. The famous ceiling on labor compensation that had been abolished from the Labor Law was put back on the table. Further, he wants to cancel unemployment benefit after two refusal of offers, or for the reason that the “research was not intensive enough”!

On the other hand, he wants to strengthen France as a conquering imperialist power, increasing the defense budget by 2% of GDP, which is in line with Holland’s, and he also wants to impose compulsory military service of one month.

Far from the “out-of-system” candidate he claims to represent, politicians who surround Macron will be all that is classic. Supporters of Bayrou and Valls will no doubt be duly rewarded.

The Inexorable Rise of Fascism under the Capitalist System

If the probability that Marine Le Pen is elected in the second round is rather weak, the tendency to the rise of fascism will only intensify under the next government.

The FN has stabilized in the political sphere; it is able to impose its campaign themes, and it is now presented as a party impossible to circumvent that has found a stable electorate during the last elections.

Macron will only reinforce the tendency of the rise of fascism. As a representative of financial capital, he can only put the burden of the crisis of capitalism on the backs of the workers. The National Front will reinforce its influence by putting forward a protectionist policy against a “globalist” Macron and will continue to seek to divide the working class.

The only dam that can be made agianst the rise of fascism is certainly not an endorsement for Macron.

The only anti-fascist barrier is the development of the Front, the organization of the broad masses in the working-class neighborhoods and the workplace, the work for unity among all workers against racism and sexism and all other oppressions, in a clear strategic line of revolutionary struggle against the bourgeoisie and its state. It also requires the strengthening of international solidarity with all oppressed workers and people of the world, especially people oppressed by French imperialism.

Let’s strengthen our Party and prepare for the fight!

We must continue to mobilize against these presidential elections. It is not in their ballot boxes but in the street that we can rebuild our solidarity, that we can oppose with a real counter-power and anticipate the intense struggles that are being prepared in the next five-year period.

The proletariat needs its Party as its poltical and military center to win the coming battles against an increasingly aggressive imperialist bourgeoisie preparing to resort to fascism. This is why it is essential to strengthen and consolidate the Maoist Communist Party to advance towards the socialist revolution. Only the socialist revolution can block the road to fascism and resolve the contradictions inherent in the capitalist system and the crises it engenders.

We call for a broad mobilization during the Workers’ May Day to develop our class unity on a revolutionary basis, in order to strenghten the revolutionary boycott against the elections of the bourgeoisie!

Neither Macron nor Le Pen, boycott the elections!

Where there is oppression, there is resistance!

Let us organize the proletariat against anti-labor measures and the rise of fascism!