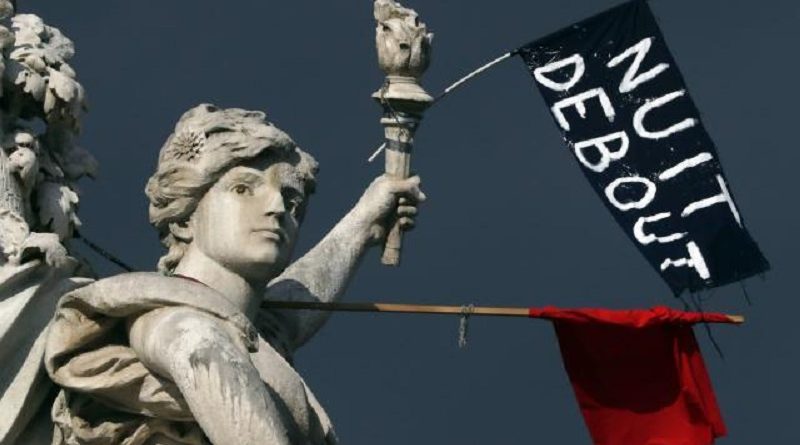 The movement of public square occupations, from the Republic to Paris, extended in many cities throughout the country: the movement spread first to cities other than Paris and then to the suburbs, to cities such as Saint-Denis, Saint-Ouen or Aubervilliers. Taking place within the framework of the mobilization against the Labor Law, the Nuit Debout (Stand All Night) movement has several characteristics, some contradictory. We will try to examine the different aspects of it, while understanding that Nuit Debout actions had different aspects depending on where they were held.

The Nature of Nuit Debout

First, what kind of movement is Nuit Debout. The movement was launched on initative of, among others, Lordon and François Ruffin under the slogan of convergence of struggles, and was part of the struggle against labor reform. But, in truth, if we question the participants, we realize that they do not all have the same vision of the movement. Basically, we can categorize two main trends, which have some overlap:

In this context, some see only it as a forum for disseminating their ideas. Without giving a clear objective to Nuit Debout, for some it is just a means of expressing their whims, which are mostly disconnected from reality or openly conspiracy theorists. Others participate enthusiastically in a space where they simply meet to discuss and act with people who think theoretically “like us”, who see it as a space of hope and freedom.

This first version, the citizenist, is the one that BFMTV serves to us 24/7 and that all so-called apolitical people try to embody everywhere. This is the version on which the government and institutional political parties and organizations rely to support the “citizen impetus” and reclaim it, relying on their “useful idiots.” This version serves to isolate the revolutionaries and those who want to push the struggle a bit further through Nuit Debout. This is what Cambadélis, the first secretary of the Parti Socialiste, relies on when he declares the need for “CRS Debout to be present, to ensure that violence does not disrupt those who want to discuss.”

Thus, in this vision, Nuit Debout becomes a giant platform where everyone is free to express whatever they want, hence the reproach of some that Nuit Debout is like group therapy. The goal of Nuit Debout are no longer the struggle but of being a “true democracy”. It’s with that vision that they say that everybody, whatever their political ideas are, is welcome and that one should respect almost total freedom of speech.

It is also in this vision that the conspiracy theorist speakers spread their anti-semitic struggle against the “new world order” or supporters of Etienne Chouard, who want to serve us their “new constitution” like its good soup. Let us focus a little more on this, because it is with this group that we have the most problems.

Many express the demand for “real democracy”. Following Chouard or Mélenchon’s idea, they say they want to write a new constitution, one which is more just, more democratic. For them the source of our problems is the 5th Republic, its constitution and laws. When we speak of struggle during assemblies, they talk about appeasement and gather people around a hypothetical “constitution”. They should understand that a piece of paper only becomes important when it becomes reality. Bourgeois laws are important only because they are carried out by the cops, the courts and the judges. By speaking in terms of “citizens”, the principal contradiction of capitalist society is erased, that is, the class contradiction. The problem is not that the current democracy is “false” but that it is the bourgeois that is a tool of the dictatorship of capital. We can’t oppose this democracy with paper, new constitutions or projects of an ideal society as utopian socialists did in the 18th century. Against bourgeois democracy, we call for organizing the proletariat around the working class in order to fight relentlessly against capitalism.

Relying on their refutation of the class struggle, they tell us that the movement should reach out to the cops and work with them so that everything goes smoothly. Similarly, after a small veneer of criticism of the media, they turn around to say that it is absolutely necessary to renounce any action that would discredit us in the media’s eyes. And above all we risk repression because we do not respect laws… In short, all their arguments are not to stand all night, but kneel all your life!

They go so far as to deny there is police repression (or even worse, encourage it, as when “leaders” of Nuit Debout at République called the cops last Saturday night) and place the blame of repression on the protesters, who they call rioters, provocateurs, violent elements, or in short, the “bad demonstrators”. This kind of speech led the organizers to collaborate increasingly with police forces – recently the Paris police headquarters issued a statement to welcome Nuit Debout’s efforts to collaborate, following the previous nights’ “violence”. This press release was immediately shared on Nuit Debout’s twitter account.

Among those who reject the fact that Nuit Debout is an apolitical movement, many would like it to be a tool for gathering the left to the grassroots level, outside of parties and unions. They are inspired by the movement of occupations which took place with the Spanish indignants for example, and they also evoke the US Occupy movement and definitely, the gathering of the “radical left” in Greece with Syriza.

According to them, these are examples of reappropriations of politics by the grassroots and an alternative to traditional parties in decline. Nevertheless, if we analyze what happened in Spain or Greece, we quickly realize that these are not models to follow. They led to the creation of new parties proposing a radical social democracy in the face of the defeat of traditional social democracy. Thus all efforts were devoted to electoral participation, selling the illusion that capitalism can be transformed from within. We have seen in Greece that Syriza has been unable to oppose the demands of the European bourgeoisie.

So, we come back to the conclusion that Marx drew in the Civil War in France, written in 1871, about the experience of the Paris Commune: the proletariat can not content itself with resuming the state apparatus for itself, but must completely destroy the bourgeois state in order to establish the dictatorship of the proletariat. Thus proletariat aspirations can flourish only through a revolution, a violent revolution – not a “citizen” revolution which by definition is not proletarian or a “revolution through ballot boxes”.

If the rejection and disgust of institutionalized political parties is something entirely legitimate, the creation of a new eclectic electoral party is not the solution. The working class and the whole proletariat needs a Party to lead the revolution – this Party must represent its interests, it must defend a revolutionary strategy and a clear political line, it must rely on the ideology of the proletariat of our time, that is to say, Marxism-Leninism-Maoism.

Can Nuit Debout be a tool of class struggle against the Labor Reform?

If we look at the composition of Nuit Debout, mainly in Paris, we realize that it is mainly petit bourgeoisie and students who are mobilized. The very form of Nuit Debout does not allow a real worker mobilization. After a long day of work, there is no time to spend a night standing, there is no energy to listen to speeches of all kinds for hours to finally only speak for three minutes. This applies mainly to Nuit Debout in the Place of the Republic and is less the case in the neighborhoods. If we look at the Nuit Debout movement in the suburbs, we see that it mainly mobilized the local association movement and a part of the trade union movement – but that group is difficult to expand, so it often falls to a circle of activists who are already known and used to speaking.

Through this quick summary, we can already see the limits of the Nuit Debout. Nevertheless, the Nuit Debout movement is not only what we’ve thus described, and positive aspects must be highlighted and supported. Apart from a whole segment of people who don’t seem to live in the same world as us, surely because they have never set foot on a construction site or in a factory, never lived in a working class neighborhood, never had a precarious job, never undergone police repression, not seen their undocumented friends risking deportation, never seen evictions, … (is that even possible?), in short, who seem to look at the world around them through rose colored glasses, there are also those who try to animate the Nuit Debout with a spirit of struggle.

It is these people who also think that peaceful demonstrations will never allow us to win any battles. It is from this place that has emerged Nuit Debout’s most interesting actions, including the police stations besieged by several hundred people to free arrested comrades; solidarity with migrants; solidarity with railway workers through occupation of railway stations; etc.

But it must be realized that strategically, Nuit Debout is much like demonstrations – they do not serve anything if they do not allow the struggle to extend its reach. What is decisive is how the working class mobilizes in this struggle, to what degree of confrontation it is ready to go. In other words, how the movement moves towards a general strike through blockades and occupation of the tools of production, distribution and communication, daring to oppose the bourgeoisie head on. This is what is decisive in the class struggle. Will Nuit Debout allow this? It is not impossible but unlikely as it stands, it would require a radical transformation of the movement with a clear objective.

It is more realistic to consider this movement for what it is: a movement whose political line is far from clear and whose social base is divided between the majority of the petit bourgeoisie and a weaker part of the proletariat, but that can allow revolutionaries to gather around them; a tool when combined with demonstrations but which is not enough in and of itself. This can only be done by leading the struggle to set up a line of demarcation, detaching itself from the citizenist line which tries to reconcile irreconcilable interests. We must explain the dynamics of class struggle, the irreconcilable interests that are the basis of the society and the role of the State and the entire superstructure of capitalism. We must reject the process which thinks that writing a new constitution is more important than developing the struggle. We have to put in place concrete actions. We must give the movement a clear goal: the withdrawal of the Labor Reform first. Not because the Labor Reform is the source of all our problems. We all know that this is only one more anti-worker and anti-people law that this government have created after the ANI, the pact of responsibility, the Macron law. The need for a resolute struggle against the Labor Reform comes from the fact that our class has had defeat after defeat since the defeat against pension reform: only a victory can make us go beyond the defensive stage to try to make new gains. It is only in this way that we will be able to consolidate the people of Nuit Debout who wants to move the class struggle to a higher level, through discussion and especially actions, while keeping in mind all the limits of this type of movement.