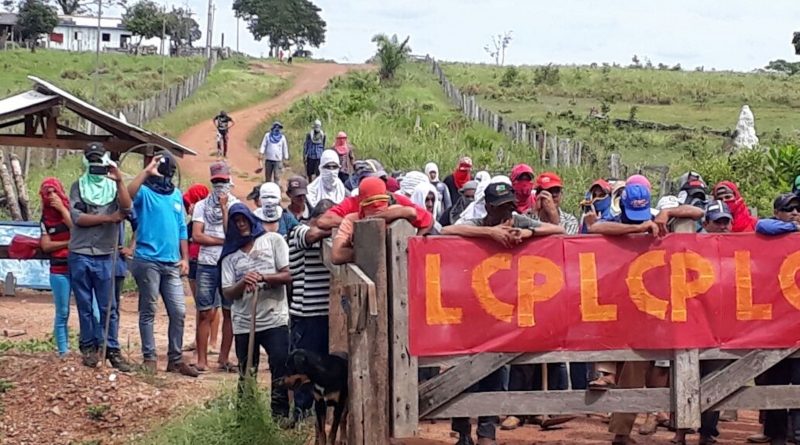 In a report sent to the editorial board of AND, the lawyer Lenir Correa denounced the preparation of a massacre against the peasants fighting in the Enilson Ribeiro encampment, which occupies the Bom Futuro latifundio in Seringueiras, state of Rondônia. The massacre would aim to dismantle the camp and the struggle of the families.

The people’s lawyer says that “in August, 12 vehicles with police officers tried to enter the Camp, in which they were repelled with rockets.  This threat to invade the camp has been constant, with policemen stating that they [peasants] have to leave, or [before this] that INCRA does not apply, ignoring the agreement and not opening dialogue,” he denounces.

Surveillance, intimidation and the imposing of conditions on the peasant station remain constant, as it was during the police terror of the camp in 2016.

Although the Agrarian Ombudsman of Rondônia, Erasmo Tenório da Silva, confirmed that the camp is located on union lands in 2016, the Enilson Ribeiro camp is a constant target of intimidation and its residents are victims of arbitrary arrests.

History of the Occupation and the Persecution

In 2016, when the peasants took the land for the first time, the camp was the victim of a stiff 36-day police siege, relying heavily on the huge police apparatus, which even included helicopters firing guns, as already shown in video released by the peasants. At the time, in agreement with the National Institute of Colonization and Agrarian Reform (INCRA), the peasants dismantled the camp.

On April 30, the peasants retook the land of the Bom Futuro latifundia and once again, they reassembled the Enilson Ribeiro encampment, which today has “more than 1,100 people, divided into five camps within the area, with more than 120 children enrolled in school,” according to Lenir.

Legal machinations such as the “allotments” made in parallel by latifundio, private squatters and agreements with judicial authorities and police forces continue from 2016 until today. Recently, the federal judge responsible for the case started preparing the eviction of the peasants, ordered in a dispatch from July 2018.

Day of the retaking of the area

LCP [League of Poor Peasants] flags hoisted in the area

Entrance to the area [Sign reads: Long Live the Enilso Ribeiro encampment! Long live the Agrarian Revolution! Build a good future for the people! Land to those who live and work on it! The people want land, not repression!]