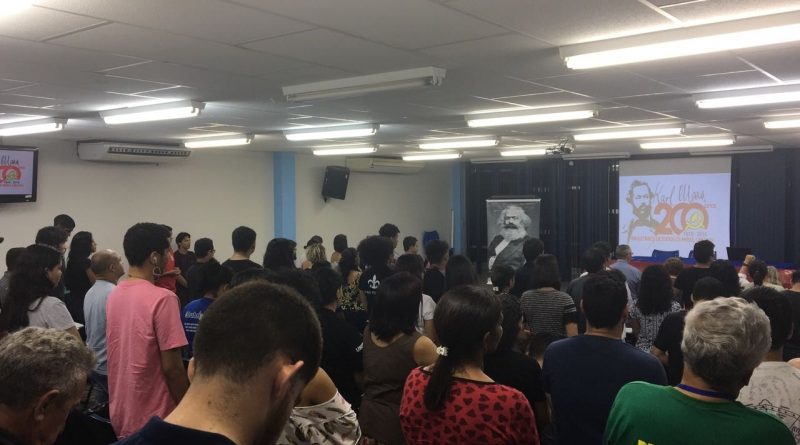 A SPECTER HAUNTS PORTO VELHO: COMMEMORATION OF 200 YEARS OF KARL MARX AT THE FEDERAL UNIVERSITY OF RONDÔNIA – UNIR

On June 12, 2018, Marx and his continuators were celebrated with revolutionary force at the 200 Years of Karl Marx Conference: From Marx to Marxism at the Federal University of Rondônia (UNIR), Porto Velho campus. The event was organized by the “History, Society and Education in Brazil” study group – HISTEDBR-UNIR and by the combative student organizations that work in this University, with Dr. Marilsa Miranda de Souza as keynote speaker. At the opening of the event, the anthem of the proletariat, the Internationale, was chanted with vigor, and an activist student of the People’s Revolutionary Student Movement (MEPR) gave an opening speech on the importance of commemorating the 200th anniversary of the birth of the great Karl Marx.

Dozens of students, teachers and organized activists listened carefully to the professor’s lecture, which dealt with the actuality of Marxism as the most advanced scientific theory that has been and will be seen on Earth since it has developed the materialistic conception of nature and history. She emphasized that Marx’s thought developed into Marxism because it was always fused in practice with the struggles of the working class. A correct handling of the Line of Masses allowed the systematization of the ideology of the proletariat, a powerful theoretical and practical instrument to transform the world. In presenting Marx’s trajectory, the speaker explained that Marxism was the product of the two-line struggle that took place in the direction of the European workers’ movement and the Communist Party at the time, in which Marx and Engels acted as a red fraction, defeating the bourgeois reformist positions. It was emphasized that Marx developed the highest understanding that the seizure of power can only take place through revolutionary violence and the dictatorship of the proletariat and that this conception was assimilated and applied by Lenin and Stalin in the Soviet Union and by President Mao Tsetung in China.
The speaker stressed that Lenin’s theoretical and practical contributions formed Leninism as the second and new stage of Marxism, a dividing line between communists and revisionists in the first half of the twentieth century, and that today we have a third, new and superior stage of the development of Marxism that is Maoism. Under Marxism-Leninism-Maoism people’s wars are developing today in various countries of the world such as India, Peru, Turkey and the Philippines. Pictures of the people’s war in these countries were presented as slides. At the end of the lecture many slogans echoed in the auditorium: The people prepare their rebellion, a new time for revolution!

After the presentation there was a heated debate with many questions and interventions which enabled the speaker to address several important issues in relation to the socialist experiences developed in the USSR and China by President Mao Tsetung. Such a debate could not be avoided, there were questions and doubts about Stalin’s government, with clear answers about social changes in socialism, the role of counterrevolutionaries in the USSR and China, and the struggle against revisionism. One student intervened by asking about the feminine question in socialism, which was answered with an explanation of the origin of female oppression, with a harsh criticism of bourgeois feminism, the advances in women’s liberation in socialist countries, and the prominent role of women as half of the class in the revolutionary process. There was a resounding slogan: For woman to free herself from all oppression, only with proletarian struggle and revolution! Awaken the Revolutionary Fury of Women!

In the second part of the debate there was the discussion about the reality of our country. The speaker explained the origin of the economic crisis, the semifeudal and the agrarian question, the processes of domination of imperialism that plundered all our wealth, the possibility of a preventive counterrevolutionary military intervention, since the ruling classes fear people’s rebellion and the New Democratic Revolution. New slogans, accompanied by the whole public: Fascists will not pass! And even: Election is farce, it does not change anything, organize the people to make revolution! The exposition ended with the defense of the Revolution as the only way of seizing power by the proletariat and other exploited classes, rejecting electoral farce and parliamentary cretinism, and taking into account the need to fight against the revisionists, following the example of Marx and other great leaders of the proletariat throughout history. The upheaval took over the public who acclaimed together with the activists many slogans, among them: Long live the 200 years of Karl Marx!

The Support Committee of the newspaper A Nova Democracia, in addition to participating in the plenary session on the role of the people’s and democratic press, organized a stall selling copies of previous and new editions of the newspaper and of revolutionary propaganda materials.