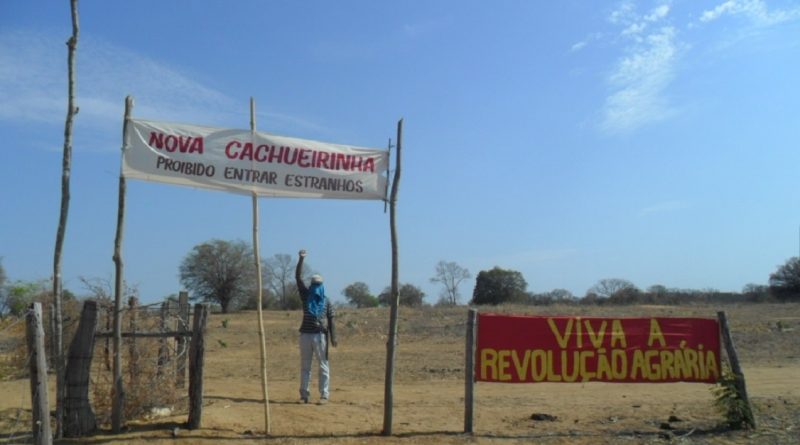 On February 25, a man identified as Eliésio, carrying a .38 caliber revolver, invaded the Comunidade Vitória and fired on two peasants, who were not injured. Before firing, Eliésio insulted the two peasants for supporting the Nova Cachoeirinha encampment.

When they tried to register a police report (BO) at the police station in Verdeland, the two peasants were encountered with an absurdity: the man who attacked them had already registered a BO against them, accusing them of aggression.

The LCP [Poor Peasants League] of Norte de Minas and Sul da Bahia, in a statement, denounced that “once again the police of Verdeland took part in the struggle against the peasants, because they must be receiving money from the landowners ‘off the books.’ That is why they also do not leave the headquarters of the farm [Vera Cruz] and even escort the landowner [Manoel Patrício de Souza Gomes] when he comes in the city, from Montes Claros, where he lives. ”

Regarding the criminal who attacked the two peasants, the LCP of Norte de Minas and Sul da Bahia denounces that this is a “provocateur, ass-kisser of rich and powerful people who, after leaving the families, applied to be the landowner’s agent, coming to contract drug addicts for all kinds of ‘services’, and who now feels ‘smooth sailing’ to do as he pleases.” The combative peasant movement still claims that Eliésio was responsible for stealing machines from the headquarters of the Vera Cruz farm and for then blaming it on the peasants of Nova Cachoeirinha.

“Once again we reaffirm: Since the Heroic Resistance of the Cachoeirinha squatters, no aggression has stopped or will stop the fight for land! All the occupied lands of the squatters of Cachoeirinha will be retaken! “, concludes the LCP of Norte de Minas and Sul da Bahia.