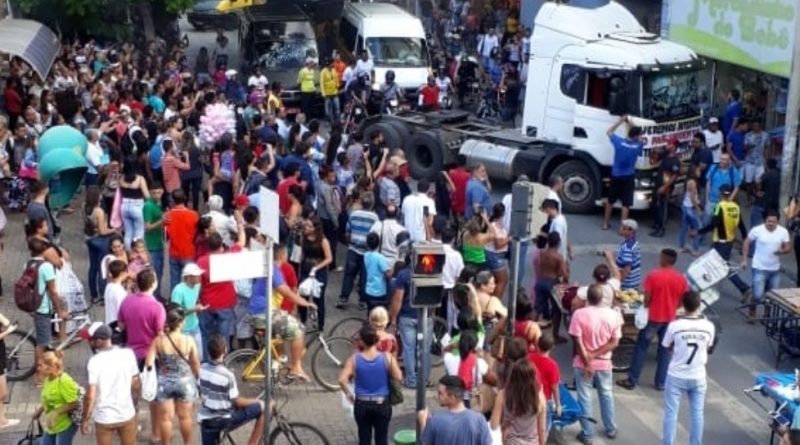 The truckers’ strike, which has entered its 6th day of mobilization throughout the country, has been supported with demonstrations by mototaxi drivers, school bus drivers, drivers providing transportation services and other masses in several regions.

The strike movement continues despite the reactionary authorization of the federal executive for the Armed Forces to repress the workers through the notorious “Law and Order Guarantee” decree, in effect throughout the country until June 4.

In addition to the truck drivers’ struggle, other categories of workers and students have also expressed their solidarity with the legitimate movement through statements and manifestos, including the Civil Construction workers of Belo Horizonte and the Workers’ League and the students of pedagogy, in a statement from the National Executive of the Pedagogy Students.

Protests in support of the truck drivers’ strike and against high fuel prices have been reported in several states since the beginning of the road blockade.

On Monday afternoon (05/25), supporters of the newspaper A Nova Democracia in Norte de Minas recorded a group of drivers of vans and trucks in Montes Claros, which received wide popular support wherever it went.

The demonstration started near the exit to Belo Horizonte from the ring road and continued along the Avenue of the Americas, passing through the Industrial District, Deputy Esteves Rodrigues Avenue, and Doutor Carlos Plaza.

During the first days of the strike, the truck drivers have been supported by many people, workers, traders and small business owners.

Paulo David is an example of this support. A businessman at Distrinorte Food Distributors, Paulo donated dozens of tents to the movement.

In the capital of Rondônia, drivers connected to the Association of School Transport of Porto Velho blared their horns on the morning of May 25. After traversing three of the city’s main avenues, the school bus convoy proceeded to Candeias do Jamari and reinforced the truck blockade on BR-364.

In the capital of Pará, more than 200 taxi drivers and app-based drivers prevented the landing of fuels in the port of Belém by closing the entrance of Miramar port, on the Arthur Bernardes highway, in the Val-de-Cans neighborhood.

In Pernambuco, in the city of Caruaru, alternative transportation drivers, taxi drivers and mototaxi drivers also held a protest in support of truck drivers and against increases in fuel prices. Demonstrators blocked the streets leading to the East Terminal, near the Church of the Rosary, and stretches of November 15 Street.

In Cuiabá, Mato Grosso, and also in the municipality of Lucas do Rio Verde, 360 km from the capital, taxi and mototaxi drivers formed motorcades on May 23 in support of the truck drivers’ strike.

In Minas Gerais, in the municipality of Divinópolis, located 122 km from Belo Horizonte, school bus drivers concentrated in the region of the Patio Shopping Divinópolis, in the neighborhood of Bom Pastor, to carry out a car race in support of the truck drivers’ strike and against the abusive increase of fuels. Some banners on the vans contained the following words: “The bus drivers support the truckers’ standstill.”

In São Paulo, dozens of motorcyclists, mostly mototaxi drivers, blocked the Dutra road for about an hour, in support of the truck drivers of Taubaté on the 4th consecutive day of the strike (05/24). The ban was at km 109, towards São Paulo.

In the municipality of Mococa, about 300 km north of the capital of São Paulo, where truck drivers are protesting at the fork between roads SP-380 and SP-340, confectioner Ana Paula Pereira made a social media appeal to friends, asking for donations of food, clothes and water.

According to the workers, every day a different restaurant from the city offers the kitchen for the preparation of the meals in support to the truck drivers. There is also a record of the donation of breads and cold cuts to the strikers.

In Rio de Janeiro, taxi drivers carried out a series of motorcades in support of truck drivers. Drivers departed from two parts of the capital: Ilha do Fundão and Shopping Metropolitano, Barra da Tijuca.

At the entrance to the Duque de Caxias refinery (Reduc), which accounts for 80% of lubricant production and the country’s largest natural gas processing, the blockade continues on this 6th day and receives solidarity from the people.

Throughout the day cars arrive with food and donations to the strikers. In an interview with G1, Luciano Guedes, owner of a pilates equipment maintenance company, explained the way he found support: “We decided to make a campaign in my company to raise money to help the truck drivers, and we were able to put together R$100. “.

In Espírito Santo, app-based drivers protested in support of the truckers strike in the state. The demonstration gathered around 60 drivers and toured the main roads of Vitoria, on Friday night (May 25).

In an interview with G1, the driver Karen Amaral said: “It does not work anymore. The price of petrol is unacceptable. We have to join the truck drivers so that the demonstration gains strength.” Another worker, Rafael Carvalho, said: ” I have been unemployed for a year and four months and I am in Uber. With the price increases (of gasoline), it is difficult to stay running.

In the city of Erechim, in Rio Grande do Sul, about 370 km from Porto Alegre, motoboys campaigned with local commerce to collect donations. According to reports, city transport drivers also joined the movement, collecting water, breads, meats, fruits, rice and soda in the city to take to truckers.

In Paraná, municipality of São José dos Pinhais, drivers of the school transport carried out a demonstration that traveled through the streets of the city center to the highways where supplies were delivered in support of the truck drivers.

In an interview, one of the organizers of the movement, Dennis Marciano, stated: “The high tax burden also affects us, because it makes Diesel very expensive. We are adding together with the truck drivers and the national population. We have to show our indignation. If you continue like this, it will stop everything.”

The Federal Highway Patrol Union in Paraná (SINPRF-PR) announced support for the movement against successive and abusive fuel price increases. “The policy of constant readjustments of fuels, while damaging millions of Brazilians, guarantees economic growth to the market,” they said in a statement.