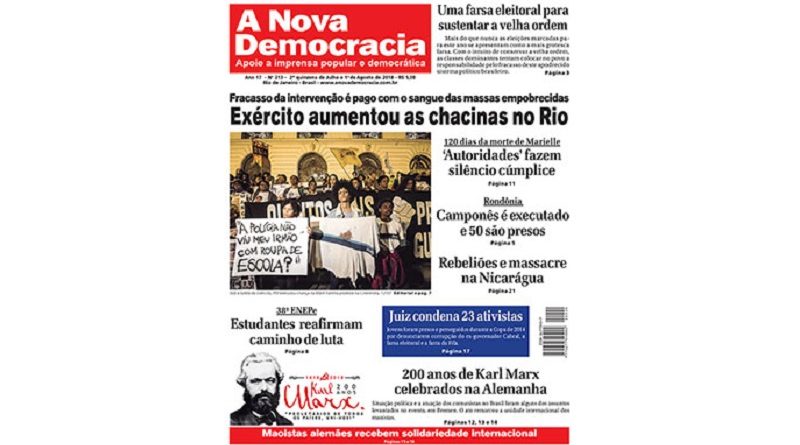 At the end of five months of military intervention in Rio de Janeiro, the evaluation of the main institutes that monitor the actions of the Army in the command of the police point to poor results in relation to the objectives of the decree.

What was shameful and frightening was the number of murders practiced by the military, usually under the mask of “self-defense”.

True massacres in the Maré, in the Alemão, Chapéu-Mangueira, Cidade de Deus, Praça Seca, Salgueiro, Lins, in the favelas of the metropolitan area of Rio de Janeiro.

From the hills of Rio de Janeiro flow the tributaries of this immense river of blood, a portrait of the reactionary civil war driven by the ruling classes through its rotten Brazilian State, whose Armed Forces increasingly assume command of the repression and genocide of the poor masses in the country.

The chaos implanted by the military in the favelas of Rio de Janeiro – with invasions of residences, searches of the residents, disrespect with the women and children, incursions at the crack of dawn and at the time of the beginning of the classes of the young, helicopters firing loads of bullets in low flights – provides a Dantesque scenario capable of being compared only to the worst reactionary wars.

State terror follows an growing escalation, as can be seen from the reports which show terrifying rates. For example, the increases by 80% in the slaughterings and by 128% in the deaths practiced by police compared to the indices of the last year.

As if that were not enough, Army Commander General Villas Bôas, in an act carried out by the Southeastern Military Command in honor of soldier Mário Kozel Filho (killed in an attack 50 years ago), took the opportunity to insult the memory of the Brazilian people. Villas Bôas said that “there is an identification in the population with the values of the Armed Forces and an eagerness for the reestablishment of the order”.

Before the audience, which was composed of exalted reactionary personalities, he took the plunge to change the course of prose. Before, he denied military intervention, and there, he came to admit it by saying: “I do not even see an ideological character in this. But in any case, the Armed Forces and the Army, for which I respond, if they must intervene, it will be to enforce the Constitution, maintain democracy and protect institutions. ” That is, intervene to maintain the old order of exploitation and oppression over the people and of subjugation of the Nation, which, already so rotten, is collapsing. An intervention that cannot go beyond giving a shiny finish to the tomb of the old and genocidal Brazilian state.

The army – guardian and backbone of the old bourgeois-latifundia state serving imperialism (mainly Yankee) – in its intention to intervene to defend the Constitution (manufactured according to the interests of the ruling classes and based on the minimum rights of the workers) with the intention to maintain this old democracy, born and maintained in the bowels of semicolonialism and semifeudalism, and to protect the institutions erected in the feudal privileges, will only find the most determined resistance on the part of the Brazilian people, especially the working class and peasantry.

The preventive counterrevolutionary coup – which is already underway, as expressed in the growing military intervention in the life of the country (in synthesis, in the occupation of high posts of the institutions by military officers, in addition to the movement of troops in the cities) is blatantly defended in pronouncements of high officials. One of the examples is the veiled threat to the Federal Supreme Court (STF) by the same Army commander, on the eve of Luiz Inácio’s habeas corpus trial, and in his speech at the event, where he stated that “something very grave is imminent” in Brazil.

This “very grave thing” for the ruling classes will be the inevitable uprising of the masses against this old order of exploitation and oppression.