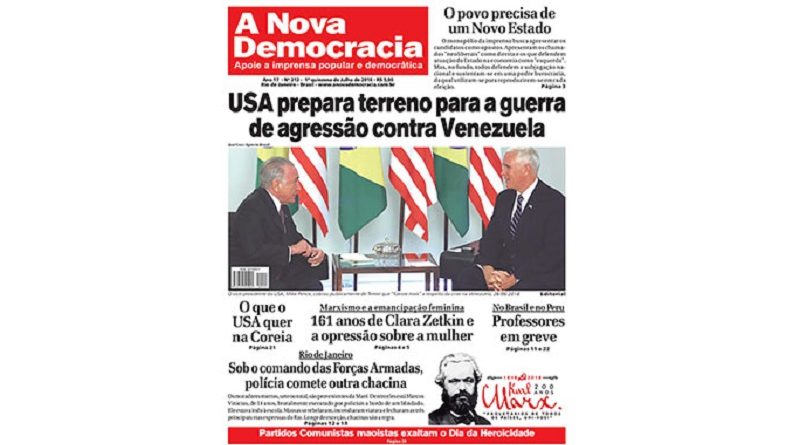 We have plenty of reasons to mistrust and speculate on the motives of so many visits by representatives of the US government, of Yankee imperialism, in our country in recent months.

Apart from the concerns of the Embassy in its permanent and systematic monitoring of the country’s political situation with the growing popular revolt through Operation “Lava Jato,” already denounced by AND [A Nova Democracia], this “concern” for security is embodied in bilateral agreements and personnel training, such as the seminar held on June 7 and 8 in Recife, aimed at “strengthening cooperation between the United States and Public Security Institutions of Northeast Brazil,” which are, in fact, façades that cover the bonds of semicoloniality and national subjugation.

Under the rubric of “security” lies a macabre agenda that involves the military intervention planned by the Pentagon to invade and depose the constitutionally elected government of Venezuela, following the failed attempts to overthrow Chávez and then his successor Maduro. These events denote the operations that compose this current plan of Yankee imperialism against the Venezuelan people and the national sovereignty of this country.

From the outset, the US Army Southern Command has elaborated and implemented the destabilization plan of the Venezuelan government, since Chávez’s time and then with Maduro. The substance of this plan is to reclaim the whole arsenal of evils historically used by the gringos to overthrow regimes that held any disagreement with imperialist domination and especially those openly opposed to it.

Then comes the stage of articulation of the means and agents who, under the command of the Yankee Army, will execute the military intervention plan. To do so, according to documents of its Southern Command, involves closing a cordon of countries around Venezuela with Panama, Colombia, Guyana, Brazil and Argentina, which requires diplomatic negotiations with the management of such countries, specifically through reserved conversations with their lackeys like the ones which happened when the deputy secretary of state and vice president of the Yankees visited Brasilia.

The vice president’s travel itinerary included the passage through Manaus, where the operations and control center of occupation is likely to be concentrated in the event of an invasion of Venezuela by the Roraima border. Or the setting up of refugee camps, for which $1 million has already been allocated by the Yankee government to manager Temer.

According to the newspaper Folha de São Paulo, at the press conference after lunch at Itamaraty, the vice president of the USA thanked Brazil for its efforts and charged more: “Thank you for your support with the reception of more than 50,000 Venezuelans, for standing up to the Maduro regime, and being a partner of the USA,” Pence said, adding,” That’s why today I say to our ally Brazil: the time has come for you to do more.”

Amid the tragedy of the Latin American peoples, the cynicism of the Yankee imperialists doesn’t cease to be comical, because the gringos close their borders to Latin Americans and pay Brazil to open its frontiers for the entry of Venezuelan refugees.

When they talk about doing more, besides counting on the use of troops and means of war of the Armed Forces in the frontier and invasion, the Yankees insinuates to put in place the requirement for the assignment of the base of Alcântara, in Maranhão, into a US military base installation in Brazilian territory.

Such demands, explicit or veiled, that muddle national sovereignty and independence can only be explained by the submission of a decrepit state in a chaotic situation to the imperialist policy of national subjugation. Incontestable evidence of the need for a Democratic, Agrarian and Anti-imperialist Revolution.