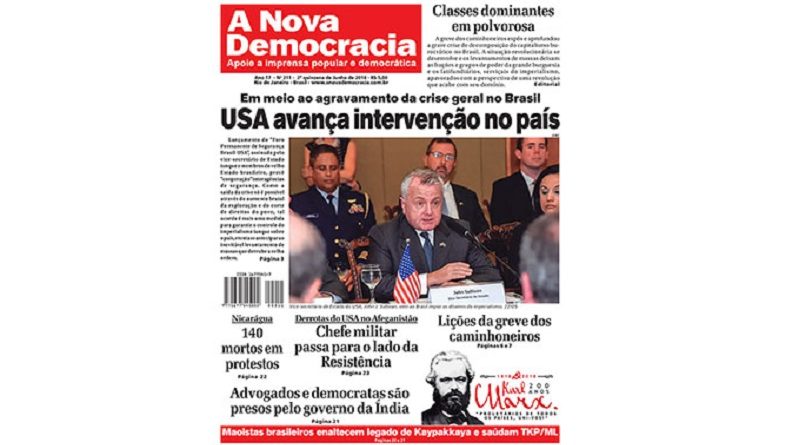 We have long been indicating that a revolutionary situation has begun to develop in Brazil, and we noticed that, with the deepening of its semicolonial and semifeudal condition, bureaucratic capitalism has gone into a general crisis of decomposition. Those at the top – more than ever – cannot and will not govern as before, and those at the bottom – harassed by exploitation and oppression, by so much injustice, abuse, brutality, repression and neglect of “constituted authorities”, frustration with official policy and their electoral farce, and, finally, with so much rot and corruption – no longer support and do not want to go on living like this.

Every day the masses rise as they can and are increasingly impatient, struggling in defense of their trampled and blatantly stolen rights. Revolts explode everywhere in the city and countryside and the repression of the old genocidal state and its shifting governments only push them into the most bellicose forms of action. Every day, the masses increasingly understand that only the way of violence will make themselves heard and solve their most elementary demands. This points to the increasing and inevitable people’s rebellion against this whole old order.

This situation of the country occurs amidst the general crisis of imperialism, whose search for recovery implies increasing the overexploitation of workers, reducing as much as possible their hard-won rights, and at the same time increasing the plunder of oppressed countries, including through the intensification of wars of pillage.

The world today, immersed in the general crisis of imperialism, is marked not only by the sharpening of the main contradiction between oppressed nations and imperialism, but also by the aggravation of the contradiction between the proletariat and the bourgeoisie and the inter-imperialist contradictions. As we already see in our country, the increase in exploitation will push the masses into increasingly hard struggles, and repression will result in violent upheavals around the world.

In our country, in turn, the complete demoralization felt towards official politics and the people’s disrepute for the authorities and institutions of its old state have already determined the failure of the next electoral farce.

No one, not the big bourgeoisie (in its two fractions), the landowners nor even the foreign “investors” see any prospect of political stability in the country in the short term. This is a fact, despite all their cuts of the workers’ rights, sellout legislations, and all the facilities for the spoliation of our natural wealth by the foreign and local monopolistic corporations. This so-called “sustainable” recovery, until recently announced by the government and the press monopolies, has proved to be just a tale.

In the face of all this, the high command of the Armed Forces set in motion the plan of the counterrevolutionary military coup to prevent the people’s rebellion, which already threatens the old order; the mere idea of ​​its outbreak makes the whole exploitative scoundrel and its armed wing tremble. The military intervention in Rio de Janeiro, as a “laboratory experiment”, has already shown what it will be on an amplified scale: a resounding failure, even in the medium and long term.

Part of these events – to which we can attribute a weight equivalent to the demonstrations of 2013 and 2014 – can be seen in the recent strike of the truck drivers, for whom the drop of water which broke the camel’s back was the price policy imposed on Petrobras by the imperialist dictates.

Now, as before, the weight of the masses in revolt tramples the attempts of the reactionaries to manipulate them, while leaving the electoral opportunist “left” to curse it as a “thing of the right.” Taking advantage of the discontent and fury of the people with all this rottenness, the extreme right let out its shouting for “military intervention already”. I would cry that although the revolt currently serves the propaganda of the current coup plot, the coup will eventually fall into its empty demagogic and patriot discourse, with the Armed Forces called to display their military power and to “convince” the most resilient to end the movement under the old blah-blah of the “infiltrated minority”.

Jair Bolsonaro, a formidable candidate who is avid for power, facing the radicalization of the movement, soon sought to withdraw his electoral support. But the fact is that nothing could stop the movement in its strength, force, its spread abroad and the commotion of the people in its support. Not the threats of repression, the “Guarantee of Law and Order” with militias grinding their teeth, the condemnations of the demoralized politicians, nor the lies of the media monopoly. The people’s clamor during the strike was a clear declaration of war against this old order in a cry for a general change of the country.

The locution of the companies (those who most brutally exploited transport workers) only threw fuel on the fire, for the active body of the strike and the target of popular support were the autonomous truckers, whose true leaderships were ignored in the negotiations set up in the palace by Temer’s gang. And the agreement of a government demoralized and desperate to prevent a general collapse in the country, fundamentally attending to the interests of monopoly companies, was only another mess of the politically deceased, exposing even more the aggravation of contradictions among the big bourgeoisie and landowners.

The first to shout were the latifundia (agribusinesses) together with Globo, triggering a campaign of blackmail and threats of high inflation due to rising freight prices. The oil sector, beginning with the leeches of the market, alarmed Petrobras’ possibility of collapse and, as if that were not enough, manipulated a fall in the value of the company’s shares on the New York Stock Exchange and São Paulo Stock Exchange.

The diesel distributors and importers also entered the fray to guarantee their monopolistic interests, as well as the union of the owners of fuel stations. The National Confederation of Industry (CNI) – which soon will no longer have much to represent in the face of the aggressive policy of deindustrialization of the country – adhered to the alarmism of agribusiness.

The failure to meet the claims of autonomous (legitimately in revolt) truck drivers only released more flammable material into the national situation. Not to mention the wrath of the employees of the cargo companies in which the conditions of exploitation are even more brutal, and who, in this strike, did not completely raise their claims. These are the working masses who are aware of their strength in stopping the country, the capacity for mobilization and the popular support they have gathered.

The truckers’ strike pointed to the General Strike as a weapon of the workers to defend the rights of the people and to fight the criminal anti-worker reforms. More than this, it showed that the path of people’s rebellion against the old order of exploitation and oppression is full of potentialities and possibilities, especially if they are increasingly united with the combative struggle of the peasants for the conquest of the land through the Agrarian Revolution.

Amid the division which deepens among the ruling classes of big bourgeois and landowners, who are servants of imperialism – in the midst of their general crisis, in their increasingly desperate struggle to decide who will lose least, with the demoralization and discredit of their political system and terrified of the people’s uprising – they are setting in motion the plan of the military coup, through the marrow of their old state (the Armed Forces), to preemptively save the old order before the general conflagration.

The masses, in turn, as they have demonstrated in embryo, prepare their Revolution: the Revolution of New Democracy, Agrarian and Anti-imperialist, uninterrupted to Socialism.