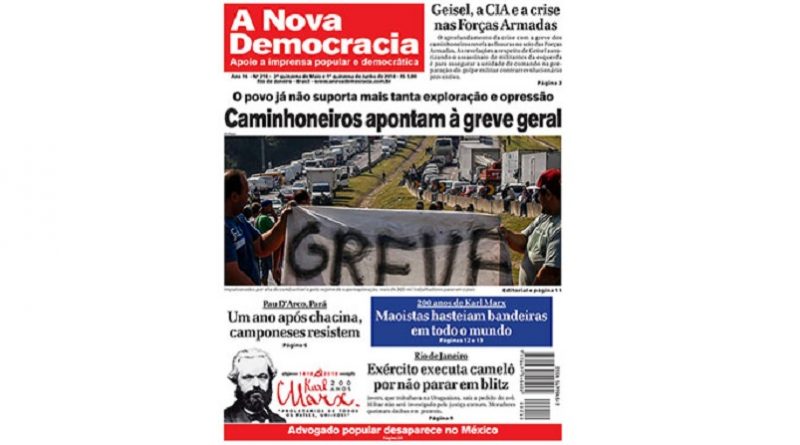 The stoppage of the truck drivers has thrown open the country’s deep general crisis in every way. In addition to shutting down the road transport system (whose fragility is the result of a bureaucratic capitalism based on semifeudal backwardness, wrapped up as modern and subjected to imperialist semicolonial domination), it also reveals that the general situation of the country is on a downward slide. A downward slide that no facade solution or supposed “managerial efficiency” (chattered about by the electoral political parties and press monopolies) can reverse. Not even the moralistic and redemptive bravado of a USA-bootlicking military coup can do it. Brazil is shaken, and its true forces have begun to turn about. From now on, nothing can stay where it has been up to now.

The great upheaval of the truck drivers cannot be attributed, as the electoral opportunists and the official discourse do, to a simple lockout (employer strike). It is true that much of the movement is driven by business interests (which have greater access to channels of negotiation and preference in meeting their demands), but a large number of drivers employed by these same transport companies are subjected to absurd working conditions. Equally absurd is the fact that more than 40% of the fleet of trucks belongs to workers who have invested their last savings in the purchase of the vehicle and work themselves to death in inhumane working conditions imposed by the carriers and large freight contractors, which flatten the freight rate and impose impracticable deadlines, making impossible the survival of the drivers and the maintenance of the trucks themselves. Add to this the extortionate toll collection on the roads.

Even in the face of shortages in fuel and food and chaos in public transport, there was widespread popular support for the mobilizations, and even other categories of workers joined in their way to protests, such as vans, taxi drivers and mototaxis. The tankers also gave an indication of a strike, as of the closing of this edition.

The illegitimate administration of the political corpse Temer, which seemed to be caught by surprise at the scale of the movement and thrown against the wall, was divided between temporary measures to reduce taxes and diesel prices, and negotiations with representatives of large transport operators. An initial deal came out on May 24, but the autonomous truckers refused to end the strike and forced new talks over the weekend.

Is this “radical minority”, by chance, the right-wing militia who openly pronounce themselves in the name of the Armed Forces, calling on the strike movement to create the maximum of chaos until they depose the government with a military intervention? Of course not. It is the old mark of reaction to accuse the workers and revolutionaries of this. This extreme right wants to precipitate the military coup, but the conspirators led by the USA want first to generate great public opinion in favor of the idea that only the Armed Forces has credibility to take the country from this downward slide.

Troops from the FF.AA [Armed Forces] began to move in several places, going to the blockade points, mainly at the refinery entrances, to ensure the circulation of the tankers, starting on the 28th.

We have been denouncing for several editions the march of a counterrevolutionary military coup against the inevitable rebellion of the masses against this system of exploitation and oppression. In a scenario of chaos in transport, general lack of supply, and repression to force the end of the striking movement, there is, under the circumstances, the possibility for the outcome to be more of the same in the immediate future. However, the tendency of the conspirators is to wait for the elections (that already point to a resounding failure). From this perspective, it is sufficient to observe that there are neither partisan political forces nor candidates that can represent a minimum of credibility and capacity to stabilize the country. This bankruptcy will strengthen the crisis with more capital flight.

True democrats and revolutionaries must resolutely support the strike, defending the rights of employed drivers, self-employed, and small and medium-sized businesses against large business groups that want to use workers to get their nuts out of the fire for them. These great transport firms have historically been linked to reaction and to the military-fascist regime. It is not a question, therefore, of advocating any withdrawal of the mobilizations for fear of a military coup, something so to the taste of electoral opportunism that, ignoring its own share of guilt in the current national situation, throws everything in the bet of the next election farce, from which nothing good can come to the people.

For the true democrats and revolutionaries, there is a duty to defend the interests of the workers in this strike, to mobilize and broaden popular support in the direction of building the general strike of all workers in the country, against the “reforms” that have suppressed and trampled hard-won historical rights. To do so, it is a matter of politicizing the masses to resist and take up the just popular rebellion against the ongoing counterrevolutionary military coup.

No military coup, no electoral farce. Only the democratic revolution can liberate the people and the nation from chaos, misery and imperialist pillaging.